Since our last 5MTF ride in March, I have been cycling around the world with Jenny Graham: http://theadventuresyndicate.com/round-the-world-podcast
And as far as the re-opened Simmons in Marshalswick to get supplies: 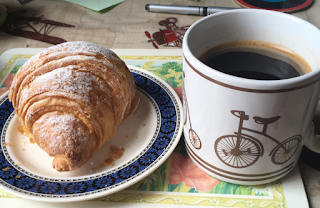 Bike Week starts on Saturday.  We did have a ride scheduled, but obviously, it ain't happening.  Bike Week will happen, online https://www.cyclinguk.org/bikeweek
Latest Cycling UK advice on latest government guidance can be found by clicking through from the links on our web-page, but includes a reminder for  'cyclists to use their own judgement when deciding whether it is sensible to undertake group rides.'
This ride leader's judgement is not sensible yet.  In carrying out my assessment I have considered the very real need to continue to limit the spread of infection, backed up by having friends and family working in health care and my own experience of how long it can take to recover from even a 'mild' dose of the virus.  So although I am missing the rides and longing to see my fabulous buddies, I am not rushing to re-instate group rides.  Thank you for your understanding.
The very good news however is that 5MTF participants have been going out solo or with their households, and more recently in limited and distanced sensibly-judged company. Hurrah!
Cycling UK's Women's Festival of Cycling is scheduled to take place 11 - 31 July.  Not certain currently as to exactly what will happen, but there will definitely be some online things, keep an eye on https://www.cyclinguk.org/womensfestival
Posted by Rona at 13:00 No comments:

An equal world is an enabled world.#IWD2020  #EachforEqual 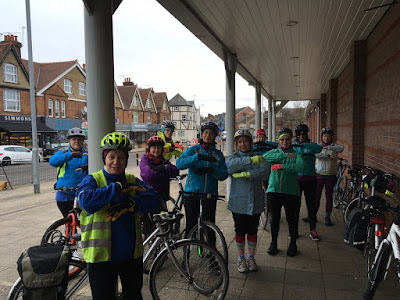 Twelve of us gathered at Morrisons for our 2020 Fabulous season-opener.  Great to see the friendly faces again and to welcome a new rider to our group.  We are signing Each for Equal.

Teresa took the eight-strong Further Faster group along the Alban Way, through Oaklands and up Nashes Farm Lane.  "There were some grumbles but we all cycled up it. We then went past Osprey onto Coopers Green Lane, back up Hammonds Lane and down into Sandridge.  We met many polite car drivers who gave way to us, and some who held back while we negotiated the puddles across the road. We went up Sandridgebury Lane and down to the Ancient Briton where we joined the Green Ring to Verulamium Park, and met up with the 5MTF group at Inn on the Park. It was a short ride of 12 miles, but good to be out in the fresh air, with no wind or rain!"

Rona and Angela took the Fabulous foursome off up Woodstock Road, and gathered up a late-running fifth at the top of Homewood Road.  "We enjoyed a gentle descent along Jersey Lane, which is hugely improved already by having a Greenspace Action Plan.  Whole sections have had the verges trimmed back to expose long covered tarmac, so the path is twice as wide as it has been of late.
Through Sandridge, then we headed up through Sandridgebury - mind the potholes!  Along Sandridgebury Lane, then left and right at the Harpenden Road, a wiggle  down to Batchwood Drive and the Green Ring took us along the Verulamium Park.  Our group arrived first and we settled in for coffee, cake and chat, being joined in due course by the further faster group.  We had covered nearly seven miles." 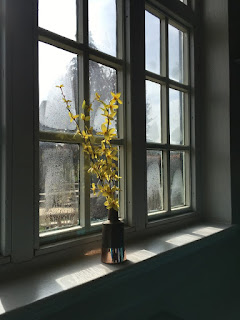 It had been a bit grey to start off, but the sun was out by the time we dispersed.  Wonderful to have such a good start to our 2020 Fabulous ride series.
Our next 5MTF is on Saturday 4 April, and we will celebrate Hertfordshire Year of Culture #HYOC2020  - the April theme is Go Somewhere Local - like we always do!

Last Saturday (8th February) four riders enjoyed the calm before the storm with a gentle season-opening relaxed ride of about eleven miles around Symondshyde and Sandridge, with a coffee stop at Carpenters Nursery.
For this Saturday (15th) the weather forecast is being scrutinised, liste for announcements
After that, our next scheduled Further Faster is 29th February and we start our Fabulous 2020 programme on 7th March.
Posted by Rona at 18:34 No comments: 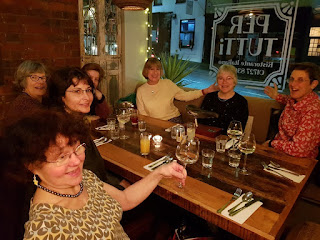 Teresa came on her first 5MTF ride in October 2013 and her confidence and enthusiasm for going further and faster developed quickly. She began to develop ride leader skills, often taking up the back marker position on rides - an important element of ride management. She also took to organising her own informal rides with friends - this is actually the whole aim of 5MTF, getting women confident enough to ride of their own accord on rides of their own devising.
In September 2016 Teresa and Angela completed the Cycling UK Ride Leader course.  Having three registered ride leaders meant we could start arranging Further Faster Fabulous rides, either splitting the regular Saturday ride into faster and not so fast groups, or as standalone rides.
Thanks to Teresa's efforts we have been going from strength to strength as a women-only cycling group, and it was a pleasure to present this award in recognition of her contribution to the expanding success of South Herts CTC women-only cycling.
This is an opportune moment to thank Jon Crosby for all his support and encouragement to Five Miles to Fabulous, not least in teaching me about blogging (and sorting me out when I get in a muddle) and keeping our web-page in good order.
Posted by Rona at 15:11 No comments:

Bit grey and cold, but twelve well-wrapped women mustered for our closing ride of the season.  Bearing in mind that weather in November can be not nice, we had decided that the St Mary's Marshalswick Christmas Fair was an excellent destination for all eventualities.  We split into two groups, with Teresa leading seven on a further faster route and Rona and Angela taking a group of five on a shorter meander.

The FF ladies shot off eastward, heading along the Alban Way, through Oaklands College, then looping to Sandridge via Nashe's Farm (they all got up the hill without walking) and Woodcock Hill.  They were surprised to meet the fabulous five coming towards them on Sandridgebury Lane. 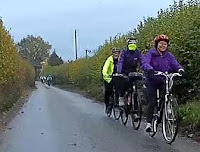 The five had meandered along the Green Ring, the Sandpit Lane section through the trees is lovely, all golden leafy today.  But the dismounts and barriers are such an irritation, especially to those with mobility impairment.  Yes, for plenty of people, including several of our group, cycling is easier than walking.  They peeled off the Green Ring at the Ancient Briton, slipping through to Sandridgebury Lane by Ellis Fields.  They were surprised to meet the faster seven coming the other way on Sandridgebury Lane! 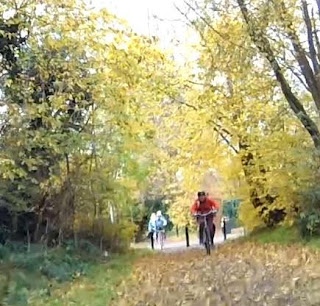 The faster group headed on round by way of the King William junction, the fabulous group carried on via Jersey Lane and Hazelmere Road, and were greeted with "Aah! More cyclists!  Welcome!" as they proffered their 50ps at the church hall door.  The faster group had got there first and were just polishing off their coffee and cake, which was convenient as the fabulous could nab their seats.  The fair was going very well, and we can give a highly favourable report of the coffee, the tea, the cakes, the stalls and the knitted village 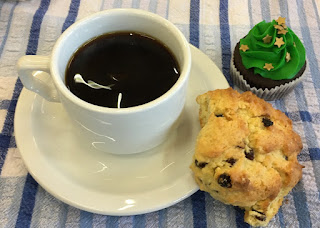 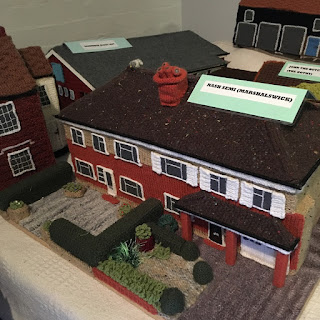 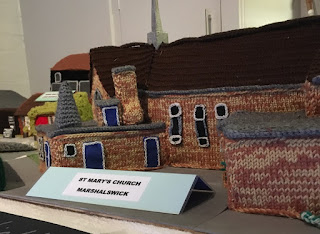 We all dispersed from Marshalswick, most of us with bulging panniers and baskets full of goodies.  The further faster group had completed 11.5 miles, the fabulous group had covered 6.5 miles.

Teresa reports: Six of us set out on a cold crisp morning to go to Ayot St Lawrence. We went via Sandridge, Ayres End Lane, Pipers Lane, Leasey Bridge Lane, Marshalls Heath Lane, Ballslough Hill and Bibbs Hall Lane. It was a beautiful, still day, with only a few puddles! And the sun shone for most of the morning. We came back along Bride Hall Lane and Codicote Road to Wheathampstead, where we stopped for coffee. We returned to St Albans via Marford Road, Beech Hyde Lane and Coleman Green Lane into Sandridge. Four of us split to go back along Jersey Lane, and two of us returned along  Sandridgebury Lane. We had completed 22 miles, but I enjoyed the ride so much, I forgot to take any photos.

Seven of us gathered at the start point.  We have moved the meeting place slightly, we now congregate under Morrisons canopy more or less opposite the Woodstock Road junction, which keeps us dry and avoids causing congestion around the cycle stands.  For the ride we split the group into a Further Faster trio and a Fabulous four.

The FF group went sprinting off along the Alban Way, although they had to slow down a bit to scramble over the fallen tree.  They went up through Chiswell Green and Potters Crouch, crossed the Hemel Hempstead Road and along Beechtree Lane towards Gorhambury.  Oops, we had completely forgotten that Gorhambury Walk is closed to the public on Saturdays from 1 September to 1 February.  Fortunately, several Land Rovers drew up at the gate and disgorged people with guns, so our riders then remembered about the shooting season and instead of getting into trouble, headed back to the A4147 and hightailed it to Verulamium Park.  They were well ensconced in the Inn on the Park by the time the Fabulous four arrived.

The Fab four were actually five for much of the morning, as they picked up a late-running rider as they headed east along the Alban Way.  The quintet then wended their way through the orchards of Hill End and Cell Barnes Hospitals, now encompassed by Highfield Park.  There were still quite a few apples on trees and on the ground, but it was rainy and the group opted to keep riding.  They went all the way up London Road as far as the shared footway goes, crossed over at the toucan and headed down to the Watercress Wildlife Association nature reserve at the end of Riverside Road.

We almost don't want to tell you about this hidden gem, it is so secluded and peaceful.  It includes an orchard, and there were apples on sale. 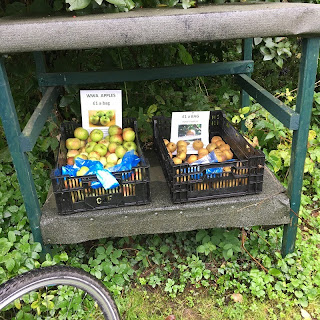 The group parked up at the lovely cycle stands and headed for a wander, taking in the mere, the orchard and the various other habitats. 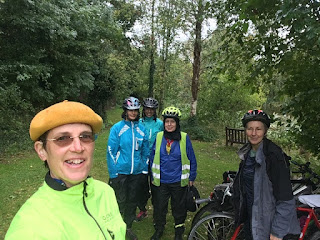 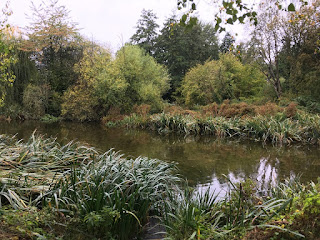 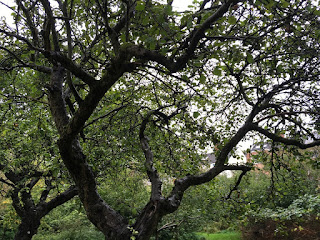 One rider opted for a shorter morning and headed for home at that point, the remaining four carried on to the Inn on the Park for coffee and chat.

The rain never quite let up but we still had an enjoyable morning.