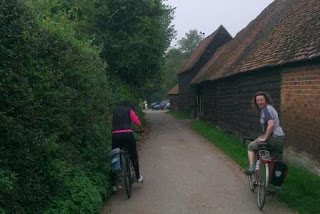 After carefully perusing the Open Studios booklet, we decided to revisit Frogs Folly in Southdown.  5MTF went there in  2012, but none of the three who met the leader at Morrisons on a grey September morning had been on that ride.  So we set off up Woodstock Road, heading for Sandridgebury Lane.  Offered the option of rough but traffic free track or going around on the tarmac, the preference was for the track.  So off we went heading for Ayers End Lane.  We managed the uphill with ease, stopping courteously as one should to let a horse and rider past.  The downhill was a bit trickier, being a bit rough and gravelly and some of us chose to walk. 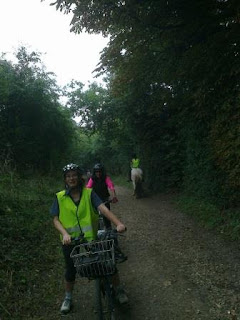 We decided on a bit of an explore, two of those present are involved with the Cycle Campaign's work on the revision of the St Albans District Cycle map, and Cross Lane was not familiar to us.  Super route - a chat with a dog walker and some more horse riders made it a sociable route too.
This brought us nicely to the eastern edge of Southdown and our intended studio.  Puzzled by lack of hi-viz flags, we checked the booklet.  Oops, seven days too early.  (Should've gone to Specsavers.) Not to worry, we admired ceramics and cake and photographs at Jay's delicatessen in Southdown. 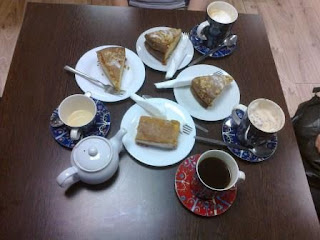 Having established our walking credentials, it was obvious that we should take the footpath through to Ferrers Lane. Then we rode on a Nomansland path (as is permitted) and back to Sandridge using the track parallel to the B road.

Back into St Albans by Jersey Lane.
Posted by ShertsCTC at 11:17 No comments: