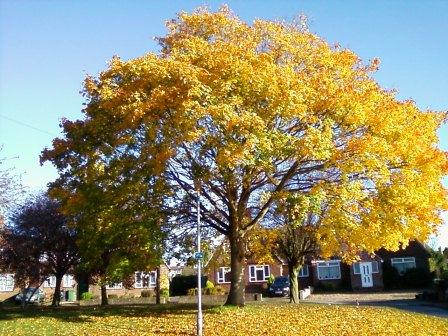 What a beautiful day for our last programmed 5MTF ride of 2012! Clear blue sky. And, er, some snow on car windscreens. Dashing from the house to the meeting point I was glad I had put on my winter jacket, but regretted that I had not put on warmer layers below.

We decided we needed some open country so as to be in the sun, and we headed down the Camp cycle route for Highfield Park, looped along east then turned north through Oaklands College.

We discovered that the disadvantage of open country was exposure to the biting wind. So, some respite on Jersey Lane, and beautiful autumn colour as we emerged at Sandridge. The eagle-eyed may be able to make out the bicycle sign in front of the tree. Then by Nomansland and Amwell to Wheathampstead. Bakery full to overflowing, but space for us at Jack’s for hot drinks and calorific intake. For our return we took the scenic track along the north of the Lee, then up to Beech Hyde Lane and swiftly (wind behind) to Sandridge and back to St Albans via Sandridgebury Lane.
Posted by ShertsCTC at 12:01 No comments: 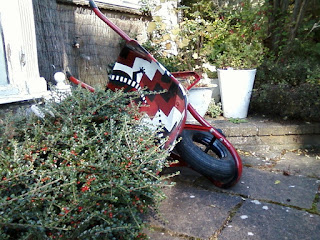 It was a beautiful morning, and the quartet’s route specification was ‘get us into the countryside’. As my selection from the Open Studios programme (www.hvaf.org.uk) was on the fringes of Southdown; that was the route sorted. We headed up to the King William by way of Woodstock Road, Homewood Road and Marshal’s Drive, down Valley Road, and into Sandridgebury Lane. I always enjoy the view you get of Sandridge from this lane. We nicked through at the Scout Hut and came down the bridleway to Heartwood Car Park, where lots of walkers were about for the Herts Hike. We continued down the access track and across to Coleman Green Lane.

We now experienced the best and worst of Range Rover drivers. A gent waited for a widening of the road and then came smoothly through. Then a young woman nearly took us out as she needlessly and stupidly cut the corner out of Drovers Way. Ruffled nerves were soothed by the beauty of Nomansland and a friendly encounter with a couple of horsewomen. At Pipers Grove we were a bit ahead of schedule, so headed to Artscape at Southdown for our bonus art exhibition and to stock up on artists’ supplies. 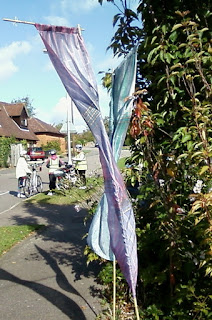 Back to our destination and a warm welcome from artists Belinda Naylor-Stables (drawing, painting, textiles) and Elspeth Keith (ceramics). We were plied with delicious tea and coffee whilst the artists gave us background to their work. Elspeth’s ceramics have an amazing delicate and crusty texture thanks to the fizzy glaze she uses. Works of nature and human craft influences Belinda’s paintings. Anglo-Saxon runes have recently influenced both artists. Actually, the artwork that particularly appealed to us was the wheelbarrow, but fortunately our speculation on how to get it back to St Albans was cut short, as this one is not for sale.

The other picture shows us getting ready to leave Frog’s Folly and head back to St Albans. As the route out was so satisfactory, we saw no need to go a different way back.

Posted by ShertsCTC at 12:03 No comments:

Our ride on Saturday 1 September saw a trio of us set off for Hatfield along the Alban Way. 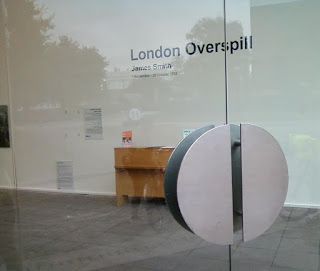 We fairly whizzed along, and so reckoned we had time to enjoy an exhibition at the University Art and Design Gallery in College Lane.

I had not checked if there was a show on, when we arrived we could see that the exhibition was due to be open... but the door was not open.  Oh well, we'll just go and have a coffee at the Forum. 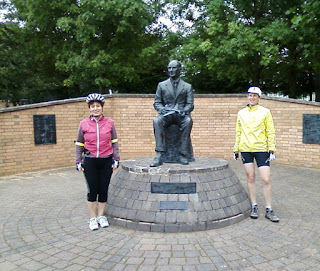 We turned off a bit too soon, and met Sir Geoffrey himself.  Carried on, more closed doors.  I think we assume that weekends out of term time the university is dormant. 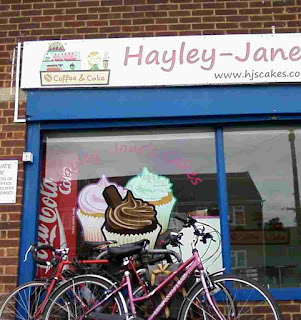 We considered our options. If we were going for a coffee we wouldn't be starting from here sort of thing. We decided to make our way back towards St Albans. As we meandered through Colney Heath, a shopfront and a cycle stand caught our eye and we stopped instantly. Three chairs set out inside, obviously this was fated to be our coffee stop today.

Refreshed, we returned to St Albans pausing only to get lost in the maze in Highfield Park (sorry, too dizzy to take a photo of this).
Posted by ShertsCTC at 12:13 No comments:

Just two of us today, and we marked the eve of the Olympic Torch procession coming through our area. As it was a while since we had ridden east, and as it was farmers’ market day in Hatfield, our route choice was made. 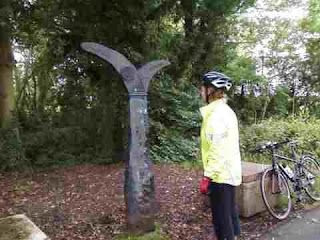 We left the torch route at Morrisons to ride along parallel on the Alban Way. We stopped for a breather at the boundary milepost (I checked this on the map after - I had thought the nearby Blackberry Arch was the boundary between St Albans and Hatfield, but actually it is this milepost). Coincidentally there was a shower of rain, so we spent a bit of time admiring the milepost before deciding to ride on anyway.

The farmers market was cheerful in spite of the wet, and we enjoyed a browse before our elevenses at Simmons. The sun actually came out and the whole scene got a bit livelier. We decided on a loop through Old Hatfield, and found ourselves on the actual torch route as we freewheeled down French Horn Lane - there was a road-worker setting out the 'no parking' cones. 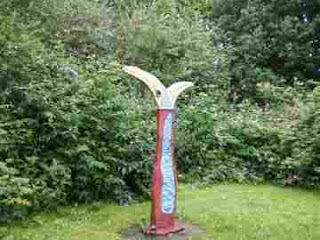 It is always a lovely detour through Old Hatfield, along the NCN 12 Great North Way. We popped out on the Hertford Road and turned westward, riding briefly on the Great North Road itself, then over the East Coast Main Line and back onto the former St Albans Branch of the Great North Railway. Another milepost to admire, this one more colourful, and for the horticulturalists, that is some buddleia just coming into bloom in the background.

A straightforward ride back to St Albans on the Alban Way, now going in the same direction as the torch.
Posted by ShertsCTC at 12:17 No comments: 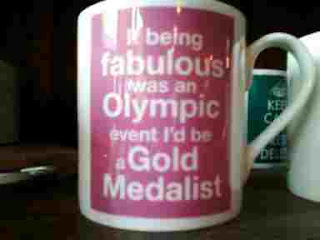 As the first local ride of Bike Week we thought we might be mobbed. But it turned out to be a select duo who hit the roads and tracks (there was another slightly longer CTC ride starting at 10am).

The sky was grey, so we felt going to Notcutts for coffee was likely to end in a drenching (see reports passim). Instead, we only went so far along the Alban Way, then through the Oaklands College grounds and across Sandpit Lane. Up to Nashes Farm, enjoying the views. Down to Osprey, where we browsed the eclectic merchandise before a relaxing cuppa in the Saddlery Cafe. 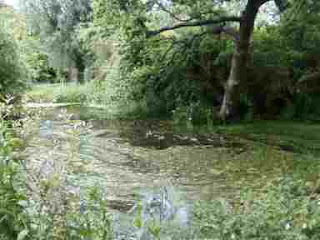 We liked the sentiment on the mug, very appropriate and topical. Refreshed, we headed over Woodcock Hill to Sandridge and back home via Jersey Lane. For those of you who have not been along Jersey Lane recently, we can advise that part of the surface has been renewed with bitumenised gravel, so our fears of a squishy muddy surface after all the rain were not realised. We made a slight diversion to admire the pond.
Posted by ShertsCTC at 12:19 No comments: 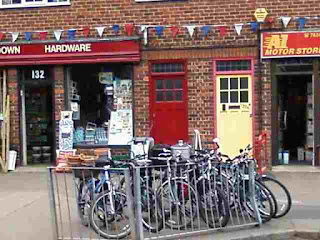 Weather could have gone either way; it looked a bit grey.  But it was mild, it stayed dry and we even saw some blue sky. Five of us were out today.  We set off east along the Alban Way, and then turned north through Oaklands College grounds.  House Lane had the added interest of three tankers along the way sucking sludge out of the drains.  We paused at Harefield House on the edge of Sandridge to pay homage to Lady Gibbons, who rode around the parish on a sit-up-and-beg in the 1920s.

We also paused on Nomansland Common for a brief historical review then pressed on to Southdown for coffee at Jay's Delicatessen.  Apart from the modern street furniture and bikes, you might think it was 1953 in Southdown. Refreshed, we gained altitude using the fabulous method of walking up the one-way section of Cravells Road. 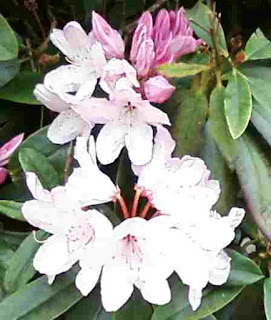 This brought us out on the delightful lanes of East Common.  It got better and better, the rhododendrons at Childwickbury are stunning just now. 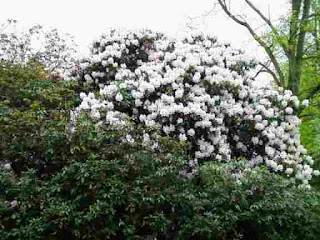 Bridleway route to Batchwood, and we made our own way home from there.
Posted by ShertsCTC at 12:21 No comments: 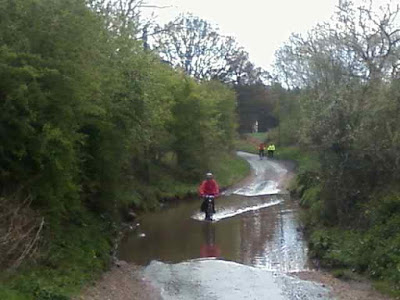 Four ladies were lucky enough to enjoy a shower-free morning - but we did not know that would be so at the outset, and took the precautionary approach of choosing a 'loop' route, sticking close to the St Albans occidental perimeter. West along the Alban Way, with a pause to look with dismay upon the empty stand for the Lost Rails display board at London Road station. A consolation pause to enjoy the view over the Watercress Beds Wildlife area. At the end of the Alban Way we turned onto NCR6, which took us up Abbots Avenue and across Watling Street and through to the Watford Road. West a short way, then into Greenwood Park, up to Chiswell Green and along past the cyclists' entrance to Butterfly World and into the lanes.

As you can see, the lane was flooded right across at one point. A quick tutorial on how to get through - take the middle i.e. high point of the road so the water is shallowest, and send the leader through first to check for sharks and potholes. Which puts the leader in a good position to take photos of the rest of the gang coming through. We enjoyed the peace of Gorhambury Estate, even if it does involve a hill, but the ruins of Nicholas Bacon's house offer history and recuperation (and then a thrilling freewheel down). Coffee stop at The Inn on The Park. We then made our way in accordance with the byelaws through Verulamium Park, thereafter along Prospect Road and back onto the Alban Way.
Posted by ShertsCTC at 12:23 No comments:

Four ladies braved a not-too-great weather forecast.  We opted for a straightforward out and back along the Alban Way to Ellenbrook, with a variation by coming back via Wilkins Green to Smallford and elevenses at Notcutts. 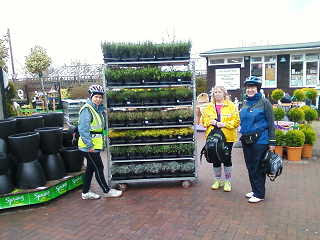 The picture shows us delighting in breathing fragrance wafting from the stack of thyme plants.  Over coffee we considered possible future ride plans - we certainly intend to enjoy a byelaw-permitted cycle ride through Verulamium Park some time soon!  For once there was no downpour as we rejoined the Hatfield Road, and we cycled nonchalantly back along the Alban Way.  It was raining when we got back to Morrisons. Next ride is on 21 April.
Posted by ShertsCTC at 12:24 No comments: