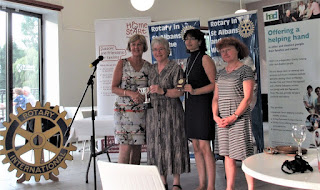 Pictured: half of the team being presented with the Rotary International St Albans Charity Cycle Ride Team Trophy at the presentation evening in early July.  We raised - or rather, our generous supporters donated - a phenomenal total of £780.  Team Fabulous thanks everyone who supported us!

Here is the earlier post about the ride and the charities the 2017 ride money goes to.

The Women's Festival of Cycling is celebrating ten years since the 5 Miles to Fabulous promotion of cycling for women.  South Herts have organised 5MTF rides since the beginning. 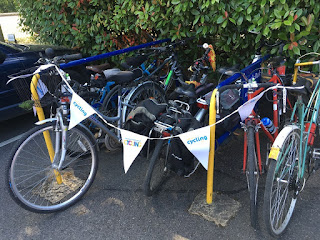 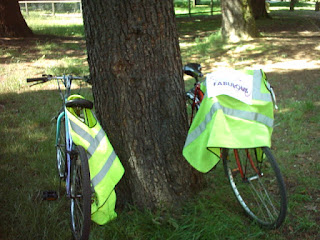 We were not sure how many might turn up, as the ride has been well-promoted, so we were prepared to split the ride into more and less experienced groups.  With three leaders and eight participants, we had exactly the right number of goody-bags!
Two riders opted for a longer, more challenging option - twelve miles out to the farm shop at Pepperstock and eight back  - over the hills and far away!  Sailing along the lanes, the freedom of movement as they flew through the underpass contrasting with the stationary traffic on the M1 overhead.
The rest of us elected to go a wending eight mile pootle around Highfield, the same area as our first ever 5MTF.  Alban Way to Hill End, then through the Hill End and Cell Barnes orchards, a loop down Nightingale Lane and along the A414, back up to Highfield and a loop along Herons Way to drop in to Ayletts Nurseries and the excellent Dahlia coffee house.  Another dive into Highfield, then the Camp Cycle Route got us back to our starting point.
Posted by Rona at 15:22 No comments: