This Girl Can in Herts 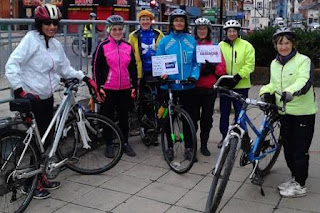 Nine of us gathered at Morrisons, and it was nice to say hello to gathering Saunterers.  It was grey and a bit chilly, we soon sped off up Woodstock Road and Homewood Road then down to Jersey Lane, which we followed out to Sandridge.

We looped around the lanes, up Coleman Green Lane, across Tower Hill Lane and down through Symondshyde Great Woods.  We rode in a block a short way along Coopers Green Lane, then turned off and were soon ensconced at Osprey.  They had been forewarned that lots of women cyclists would be arriving, as the Harpenden Breeze ride was also coming here, and we were to meet up.  Being a canny and experienced ride leader, I made sure that my group got there first to plunder the splendid array of cakes.  The Saddlery Café at Osprey has some really huge tables, so all nine of us could sit round.  The comestibles are served up on proper crockery too, and with dainty dessert forks.  We can confirm it is all delicious. 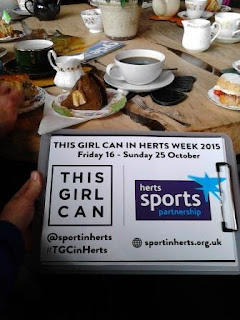 Breeze were slightly behind schedule, but it worked well - the staff had time to draw breath before the next horde of women arrived, and the two groups had time to greet each other in the yard as they headed in and we headed out.

We took a fairly direct route back, along past Nashe's Farm.  Delightfully, Neil's Sauntering group caught up with us on their way back from Wheathampstead, and we rode through Oaklands together, and so back to Morrisons along the Alban Way.  We covered 10.5 miles today.
Posted by ShertsCTC at 10:42 No comments: