Bike Week in the Rain 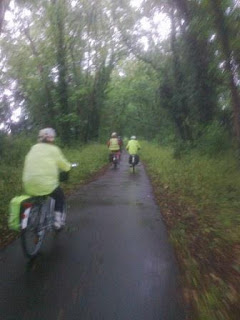 The magnificent seven gathered by the covered bike racks at Morrisons, undeterred by poor forecast and actual rain.  The intention had been to explore Ellenbrook Fields, but we postponed that for a drier day.  Set off east along the Alban Way to see where we might get to.  Early excitement was riding around the Green Ring into Sutton Road instead of dodging the shoppers through Morrisons Car Park.

We rode steadily to Ellenbrook where the Nast Hyde Halt station has been getting some TLC.  Decided to continue to Hatfield then duck into the Sports Village café for refreshment, which we duly did. There was some interest in a good route to Hatfield House, so we carried on east along the Alban Way, right to the end. 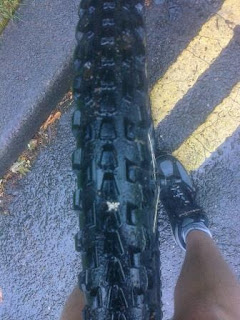 We had just started along the A1000 route when  - pssssss - a very flat tyre.  You'll never guess what had caused the flat.... a butterfly!  A butterfly stud earring.  That is a pretty fabulous puncture, you have to admit.  With no problem in locating the hole the repair was swiftly completed, and we carried on, crossing over to NCN12 through Old Hatfield, then boldly up through newer Hatfield, riding en bloc, and back to the Alban Way.

An eleven mile ride when I measured off the map once I had got home and dried off.  My legs are saying they were long miles!
Posted by ShertsCTC at 10:57 No comments: