Ten riders set off, eight who had been before and two who joined us having seen the ride in the Sustainable St Albans Week brochure.  Another beautiful spring day.  Teresa and two others departed on a Further Faster expedition, see their report below.  Angela and Rona led the rest of the group on a delightful wend around Highfield Park.  Lovely blossom, the oaks still bare but with a shimmer of green buds, and verdant pathways. 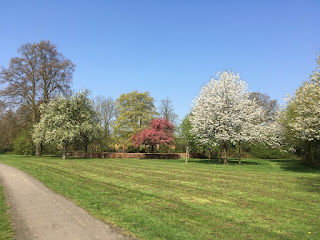 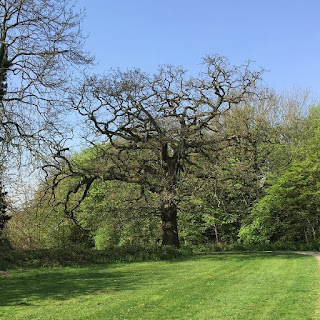 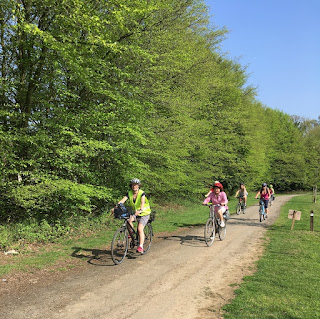 From Highfield we crossed London Road and then used the bridleway from Heronsway through to Napsbury Lane, admiring the bluebells. 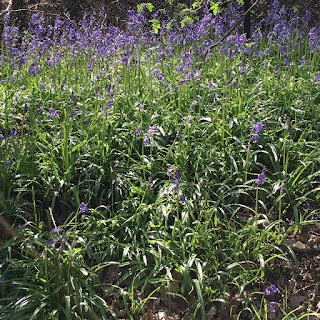 We had selected Ayletts for our coffee stop, as they are also participating in Sustainable St Albans Week.  So after our 4 mile jaunt we enjoyed refreshing drinks, wittles and chat, and met the Further Faster trio coming in as we were heading out.  Back to Morrisons  through Highfield again then the Camp cycle route, bringing our total ride distance to 7 miles.

A Further Fabulous Three had split off from the 5 Miles to Fabulous group to do a slightly longer, faster ride: we went along the Alban Way to the Galleria, cut through the University of Herts campus, under the underpass to go to Roestock. Having cycled around the triangle, we retraced our steps back to the Alban Way, then along Wilkins Green Lane, and over to Sleapshyde. We were briefly on the A414 (on the shared foot/cycleway), then off along Colney Heath Lane and Barley Mow Lane to Tyttenhanger Green. Stones were thrown at us on this part of the route, but we cycled on. We took a detour through Highfield Park then onto London Road, Herons Way and Ayletts, where we met the 5MTF group just leaving. We returned via Drakes Drive to the Alban Way and Morrisons. A total of about 20 miles on a gorgeous day for cycling!