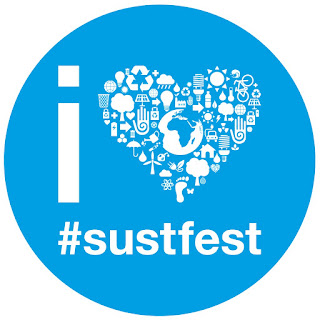 We had nine and a half participants on our SustFest special rides.  The half was being towed in a trailer attached to his mum's bike!  We do designate our rides as 'for adult women', but under-fives that are connected to their adult can be included if practicable. 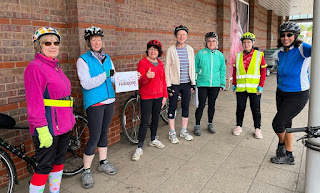 The ride started from Morrisons on Hatfield Road, here are most of us getting ready for the off.  We split into two groups, a slower, shorter 'Fabulous' group and a 'Further Faster' squad.
The Fabulous five-and-a-half headed out along the Alban Way. then turned into Highfield Park.

The picture above shows the stately trees, the long grass and some new plantings, they are just little sticks at the moment. With care, we got the trailer through the gap at Hixberry Lane, but at Highfield Lane lifting was required.  We do need barriers to active travel to be removed!  Literally.
We headed down Highfield Lane then along the A414 cycle-path then up Nightingale Lane.  It made a change to ride this clockwise, we usually do this loop anti-clockwise.  We do need vegetation on active travel routes to be regularly trimmed - there were places where we needed to duck and where the path was down to single file.
Coffee was calling, so we sped along the cycle track on Highfield Park Drive and used the toucan crossing of London Road to get to the Herons Way bridleway.  This popped us out on Napsbury Lane, and in no time at all we were locking up at Aylett's cycle stands.  These are the best type, sturdy 'Sheffield' racks that support the bike when loading and let you securely lock the frame and wheels. And of course Ayletts can deliver your heavy or bulky purchases. 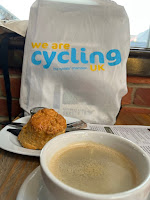 We had chosen the Seasons cafe at Ayletts for our coffee stop today because Ayletts was a  a SustFest Gold Sponsor in 2021 and do a lot to promote sustainability, as outlined on this webpage.  We had also chosen this cafe because it has lovely staff  (who take photos for us!) and serves good food and drinks. 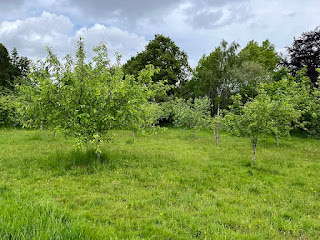 We headed back along the A414 and up the London Road cycle route, back along Highfield Park Drive and then through Cell Barnes orchard with its long grass and meadow flowers.  We used the Camp Cycle Route to get back to Morrisons, having completed just short of eight miles.
The Further Faster foursome went along the Alban Way, through Oaklands, along House Lane and up Coleman Green Lane. House Lane was busier than expected, with fast moving traffic. We do need lower speed limits on urban roads and rural lanes to favour active travel.
We turned off onto Drovers Lane, across to Nomansland then up to Amwell. This was quite a steep climb, but we all survived. We then had the lovely ride down Brewhouse Hill into Wheathampstead and the coffee stop. We were lucky to get some seats there, as many other cyclists were stopping for refreshments.
We returned along Marford Road, up Beech Hyde Lane, over to Tower Hill Lane, and another nice ride down Hammonds Lane through Simonshyde Woods. Having warned everyone about how busy Coopers Green Lane is, there was no traffic as we went along it for a little way, before turning off up Woodcock Hill.  Another ride down Nashes Farm Lane brought us to House Lane again, and we split off for home at Sandpit Lane. The ride was just over 16 miles on a bright clear day.
And what has a sociable cycle ride to do with Sustainability?  These rides began in 2007, when Cycling UK noticed that there were a lot of women who 'wanted to cycle but...'.  They had cycled in the past but had lost confidence, or just needed a nudge.  To help overcome the concerns these women had, Cycling UK encouraged local groups to put on easy-paced rides with a supportive vibe to help women feel comfortable with getting back on their bike.  Group rides are a great way to learn local routes.  Over 80 women have ridden at least once with our group.  A number continue to enjoy our gentle, sociable rides; having re-booted their riding, many now use their bike for convenient and environmentally-friendly transport as well as for the physical and mental health benefits cycling brings.